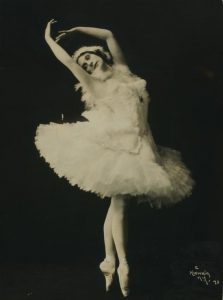 Anna Pavlovna Pavlova was a Russian prima ballerina of the late 19th and the early 20th centuries. She was a principal artist of the Imperial Russian Ballet and the Ballets Russes of Sergei Diaghilev. Pavlova is most recognized for her creation of the role of The Dying Swan and, with her own company, became the first ballerina to tour around the world, including performances in South America, India and Australia.